On the camera front, the buyers get a 2 MP f/2.2 Primary Camera and on the rear, there’s a 5 MP + 5 MP camera with features like Digital Zoom.

The phone is powered by Quad-core, 1.3 GHz, Cortex A7 processor. It runs on the MediaTek MT6580 Chipset. It has 1 GB RAM and 8 GB internal storage

It is backed by a 3000 mAh battery. Connectivity features in the smartphone include WiFi, Bluetooth, GPS, and more. 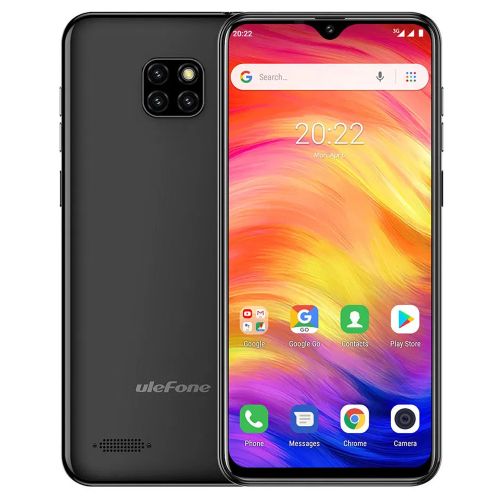 Made by: Ulefone, Available: In stock
Buy this item

As far as camera is concerned, it is incorporated with 12MP+5MP+5MP with Dual-LED Flash and AF Triple Rear Camera and 8 Megapixel Front Camera

6.1- inch 19.2:9 Water-drop Screen. The mind is not limited, as the Ulefone Note 7 screen does. The phone adapts the ultra big display with an elegant water-drop screen. Each detail or content could be enlarged as the screen is big enough for you.

8MP main camera and 2 sub camera enhance the quality and clarity of photos to a great level. Rear flash and bokeh effect contribute to present the best picture in your journey. 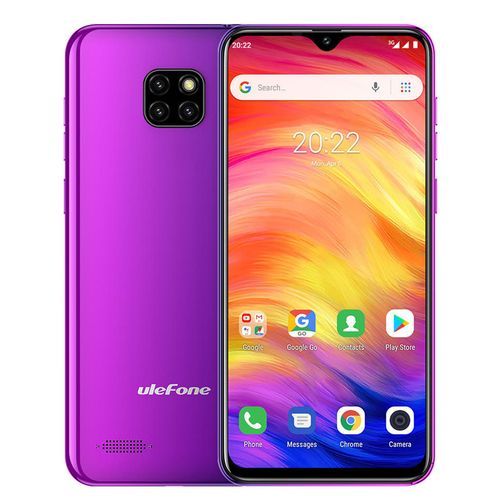 Made by: Ulefone, Available: In stock
Buy this item

Note 7 comes packed with MT6580 processor, 1GB RAM, whereas 16GB internal storage to drive the power for running multi-tasks quite fast. 64GB extendable storage could contain lots of video and music you need.

Large 3500 mAh battery to power up your whole day. The phone allows yourself to enjoy the fun for much longer.

The display of the smartphone is IPS LCD capacitive touchscreen and size is 5.5 inches that provide a resolution of 442 x 960 pixels.

The smartphone is fueled with a non-removable Li-Po 2700 mAh battery and it comes in Black, Amber Sunrise, and Midnight Green colors.

The display of the smartphone is IPS LCD capacitive touchscreen and size is 5.0 inches that provide a resolution of 720 x 1280 pixels.

In addition, there will be an 8MP rear camera and a 5MP selfie shooter, enough to capture photos and videos of adequate quality

Equipped with an MT6580 quad-core CPU that brings along a smooth and energy-efficient user experience. Reaching clock speeds up to 1.3GHz, The processor along with 2GB of RAM lets you multitask, watch movies, and play games without ever slowing down your phone. 16GB of internal storage and the support of 128GB storage expansion enables you to store a lot of files as you like.

The smartphone is fueled with a non-removable Li-Po 4000 mAh battery and it comes in a single color, Black. Ulefone Armor X6 is a rugged phone that is IP68 dust/water resistant (up to 1.5m for 30 mins) and Drop-to-concrete resistance from up to 1.2 m.

As far as camera is concerned, it is incorporated with 12MP+5MP+5MP with Dual-LED and AF Dual Rear Camera and 8MP Front camera.

The display has IPS technology with the resolution of 1520 x 720 Pixels and 292 PPI (pixels per inch). The screen is protected with a 2.5D curved glass screen and comes with features like Capacitive and Multi-touch.

The rear camera consists of an 8 MP + 2 MP lenses. The front camera has a 5 MP sensor.

The smartphone is fueled by a 5000mAh Li-Polymer battery.  The phone’s sensors include G-sensor, P-sensor, L-sensor, and E-compass.

The display of the smartphone is IPS LCD capacitive touchscreen and size is 5.0 inches that provide a resolution of 720 x 1280 pixels.

The smartphone is fueled with a non-removable Li-Po 4000 mAh battery and it comes in Black and Orange colors. The smartphone runs on the Android 10 operating system

Ulefone Power 6 sports a 6.3-inch FHD+ waterdrop screen with high 19.5:9 aspect ratio, providing you ultra-wide vision and shocking visual experience while you are watching TV or surfing the Internet. And thanks to the high resolution of 1080 x 2340, everything you see on the screen is as clear and vibrant as it’s meant to be. 2.5D curved glass makes the whole screen full of aesthetics of arc design, offering you seamless touch and better holding experience.

The 16MP+2MP dual rear camera with the flagship-grade f/1.8 big aperture help you to clearly record the beautiful scenery in the journey, capture the memorable moments in the quality they deserve. The Bokeh effect enables you to take beautiful photos without messy background. With the Pro Mode, you can show off your professional shooting technique and get exquisite photos with more details.

With massive 64GB of internal storage, the Power 6 enables you to store 13,000 images, almost 5,500 songs. It also supports 256GB TF card extendable, you don’t have to delete to free up storage any more, conversely, you can keep all your favorite apps, photos, videos and music as you like. And the 4G RAM makes the processor run smoothly.

As the 6th generation of Power series, Ulefone Power 6 has packed a large capacity 6350mAh battery that can support 64 hours’ talking time(theoretically). Under normal use, it can last at least 4 days, allowing you to enjoy web-searching, SNS, music with abandon. Ulefone Power 6 also supports 5V3A fast charge, which can fully charge your Power 6 in approx. 2 hours, safe and quick.

From the front, you are getting a 6.52-inch scrren, with 720 x 1600 pixels resolution and a dewdrop notch overhead housing the front facing camera.

On the camera department, you are getting a single 8-megapixel selfie snapper upfront, but at the back, there is a triple camera setup, which includes a 16-megapixel main snapper, a 5-megapixel macro lens, and a third 2-megapixel depth sensor, along with a dual LED flash.

On the inside, there is the Mediatek MT6762D Helio A25 CPU clocked at 1.8GHz, along with PowerVR GE8320 GPU, 4GB RAM and a 64GB internal storage, expandable up 128GB via SD card. It has a dedicated SD slot, hosted on same dual SIM trail.

The phone comes with a rear placed fingerprint scanner, has support for dual nano SIM with 4G LTE network. There is a built-in 4500mAh battery and the Android 10 runs out of the box.

The smartphone comes with a 5.5 inches HD+ and 720 x 1440 pixels resolution. The rear camera consists of a 13 MP + 2 MP lenses. The front camera has a 5 MP sensor. The phone’s sensors include Proximity, Light, Accelerometer, and Compass.

The smartphone is fueled by a 5000 mAh Li-Polymer Battery. The phone runs on Android 9 Pie.

4 Best Umidigi Phones In Kenya And Their Prices